First published in 1938, Rebecca, was Daphne du Maurier’s fifth novel. Since then it has 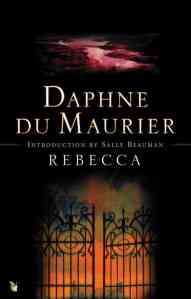 been translated into twenty languages. It has never been out of print and boasts sales of almost four thousand copies a month (source: Telegraph.co.uk). It continues to enthral and fascinate readers as much now as it did in the Twentieth Century.

A multi-faceted story it contains, I believe, all the elements of a great plot: adultery, identity, jealousy, murder and mystery. It is the story of four: two female antagonists, one man and the edifice that is Manderley.  It is the first du Maurier story I have read, and it is the first story where I encountered a nameless narrator. It is for this reason that Rebecca continues to haunt me.

Our very identities are wrapped up in our names. They are crucial to developing our sense our self, and bear heavily on who we think we are, and, is normally one of the first things we wish to learn of another.  Interestingly, in Rebecca, we are told that our heroine’s name is ‘lovely and unusual’ a name given to her by her father.  However, throughout the story, she is only ever identified as Mrs de Winter; a name given to her in matrimony by another man: her husband.  A man, Maxim de Winter, who upholds the patriarchal and class societal rules of his time. Both in the giving and in the taking, our narrator cannot embrace the one thing that may aid in steering her to a sense of who she is: her name. As a result, she willingly assumes the role of the second wife and is further erased and swallowed up in an archaic tradition. A tradition where rules are to be obeyed, a definite code of conduct is enforced, and the best that a wife can do is go along with it.

In the absence of any real sense of her own identity, it is not surprising then that our nameless narrator becomes gripped and fixated on the former, dead, first wife. The eponymous Rebecca. The woman who she believes to be the epitome of womanhood. The woman who she feels ‘…might come back into the room and she would see me there, sitting before her open drawer, which I had no right to touch’. Rebecca is the yardstick from which she appraises her inadequacies. Rebecca, she comes to believe, was everything she herself is not: a wonderful wife, beautiful, the perfect lady for Manderley. In choosing to keep the narrator nameless, Du Maurier creates a device which I believe puts the two antagonists in direct conflict.

Rebecca, though, did not follow the rules. She was rebellious, and dared to live her life as she saw fit ‘seizing life with her two hands’ and not how her controlling husband or society wanted.  She did though pay the ultimate price: death. The second Mrs de Winter allows the ghost of the former wife to haunt her.  She recognises that Rebecca’s rebellious nature was not acceptable behaviour for a woman of that time, however she remains undecided, ambivalent almost and I believe by not forcing herself to decide, a sort of admiration for Rebecca creeps in. But are they so different?  Both women have been taken to their husband’s seat: Manderley.  Both have in their own attempts tried to make it their home too.  They are both expected to conform to the strict societal norms, and conduct themselves in a prescribed manner which their stern husband expects and enforces. While it may seem that these women are polar opposites in manner and style, I think it is their crucial reactions that set them apart. Our narrator, succumbs to her husband and society, prepared to leave her identity behind forever. She chooses to believe rather than to question her husband about the real facts of his first wife’s death. After all his version must be the correct one, a man of his class would surely not deceive her. Rebecca, however fights all the way. She has broken all the rules of conduct, she was not afraid to disobey or question those rules, or more importantly the rule makers. She is Rebecca. Who is our narrator to become if she does not take charge of her own life? What type of life will she lead if she allows herself to be subsumed by everyone and everything around her?

An expert, du Maurier sums up the presence of a dead wife, through the obsession of another. She holds out a mirror where both women can look at themselves but also one another. Rebecca, in death assumes the role of a genius loci for Manderley. Her sense of otherness elevates the edifice even further, taking ownership of the once male province. I believe because she lived how she saw fit, never relinquishing her identity, she will live on. In the end Manderley will ultimately be hers.  We witness her rebellion and respond with empathy. We witness her revolt against the traditions that tie her down.   We admire her for being herself.

Our narrator, on the other hand, follows her husband into exile leaving any chance of ever finding herself behind.  She reverts to what she started out as, a paid companion, this time for a domineering man. By choosing to not force herself to ask the right questions she remains subservient in thought and action, she becomes the woman who fades away from us.  In the end it is, I believe, it is our nameless narrator who dies.

Daphne de Maurier has played with our emotions throughout this gripping tale. Which of the women deserves our sympathy? Who has really died? Who continues to live? The perils of not knowing oneself are as valid in the Twenty First Century as they were in the 1938 and I am reminded of that famous quote by Shakespeare: ‘To thine own self be true’.